Trampoline Park Injuries and the Effectiveness of Liability Waivers

Trampoline Park Injuries and the 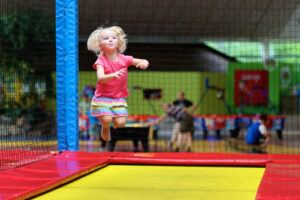 Dr. Pete Pidcoe, a biomechanical engineer and professor in Virginia, recently released his findings after years of analyzing the designs of trampoline parks.[1]  His six-year study revealed that certain design flaws can result in an unsafe transfer of energy from one trampoline to the next, causing unpredictable results.[2]

Common injuries run the gamut from scrapes, bruises, and lacerations requiring stitches to sprains/strains and dislocations all the way to broken bones, concussions and head injuries, and neck fractures and spinal cord injuries.[5]  Utah trauma surgeon Dr. Craig Cook has treated about 100 patients with trampoline-park injuries so severe that he equates them to the kind of injuries usually seen in high-speed motor vehicle accidents:  broken legs, spinal fractures, and head trauma.[6]

Nobody wants to be injured.  People go to trampoline parks to have fun, not to get hurt.  But injuries do happen and, when they do, the injured are left wondering what went wrong, who is at fault, and what their rights are.

In the case of a trampoline-park injury, participants have most likely signed a preinjury liability waiver and release before entering the facility.

In Texas, a preinjury release is effective generally if it provides “fair notice” of the rights that the signing party is giving up.[7]  In other words, to be effective, release language must be conspicuous and unambiguous.[8]  The release must be written so that a reasonable person should notice it.[9]  Actual knowledge of the release provision satisfies the fair notice requirement.[10]

The effectiveness of the release – and the ability to potentially recover against the trampoline park in court, depends not only on the release itself, but also on whether the injured person is an adult or a minor child.

For instance, in a 2018 case out of Dallas, a mother was paralyzed from the waist down after injuring her neck while jumping at a trampoline park.[11]  The mother brought suit against the facility for negligence and gross negligence.[12]  The court evaluated the preinjury release that she had signed and determined that it met both “fair notice” requirements of conspicuousness and the express negligence rule.[13]  The mother’s case was dismissed and she did not recover against the park for her injuries.[14]

The result is different for children, however.  Texas has a “strong, long-standing policy” to “protect the interests of its children.”[15]

In one Houston case, a minor child was injured at an amusement park.[16]  The court there concluded that a liability release signed by a child’s adult sibling was unenforceable and the child’s case against the amusement park on her personal injury claims was allowed to go forward.[17]  The court held that although the Texas Family Code gives parents the right to make legal decisions concerning their children, it “does not give parents the power to waive a child’s cause of action for personal injuries.”[18]  Such an interpretation, the court said, would “be against the public policy to protect minor children.”[19]

In a different Houston case, a federal court likewise held that a preinjury release signed by a minor child’s parent was invalid under Texas law.[20]  The court stated that “when a parent signs a document that releases a defendant of any liability for injuries suffered by a minor, that release is unenforceable on the basis of public policy.”[21]

Gross negligence is like negligence on steroids.  It’s more than just carelessness:  gross negligence occurs when a person “knows full well that his conduct poses an extreme risk of harm to others and yet does not care.”[22]  A finding of gross negligence can also result in an award of punitive or exemplary damages.[23]

Texas courts disagree whether a claim for gross negligence can be waived before an injury actually occurs.  In some cases, like the Dallas trampoline-park case above, courts have dismissed claims where gross negligence was covered in the language of the release.[24]  Other courts have refused to apply a preinjury release to claims of gross negligence, finding that such releases violate public policy.[25]  In other words, some cases go forward despite the release language and others do not.

Whether a preinjury release is effective, then, depends on many factors – the age of the injured person, the type of claim involved, the jurisdiction or area where the accident happened, the language of the release, and more.  There is simply no one-size-fits-all answer.

[1] CBS News, “Trampoline Park Injuries ‘Like Getting Hit with a Hammer,” Researcher Says, May 15, 2019, available at https://www.cbsnews.com/news/trampoline-park-dangers-new-research/?fbclid=IwAR3vqm9cX8dz7SG2TDg1WY2m9DAFmMG5ROBS9HNbRcslbPCqbB8hX50sSXs (last visited June 11, 2019).