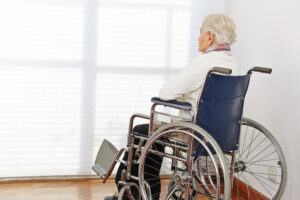 My grandparents grew up in rural Kentucky during the Great Depression.  They left Kentucky to find work in Detroit, along with countless other Appalachians.  As soon as they could flee Michigan, they did, moving to the breathtakingly beautiful Shenandoah Valley in Virginia.  There, they lived in a tidy home on the edge of a wood, surrounded by farmland.  They tended a large vegetable garden, and my grandma grew some of the most beautiful lilies I have ever seen.

They mostly kept to themselves and tended to their chores, continuing the self-sufficient lifestyle that they were raised in, enjoying visits from children and grandchildren scattered all over the country.

In their 80’s, my grandparents decided to move to an assisted living center, and frankly, we were all a little confused. They had been on their own, in their own space and running on their own timeclock, for the vast majority of their lives.  How would they adjust to living in a patio apartment, so close to neighbors, sharing a dining hall and public areas?

Surprising us all, they adjusted great. My grandma enjoyed strutting her kids and grandkids through the dining hall to the coveted private dining area whenever we were in town, and my grandpa ran an exercise class and helped widows carry their groceries to their apartments. They made friends and put my grandma’s art on display in the common areas. To the great relief and joy of us skeptics, they were happy!

Statistically, it’s no surprise that my grandparents finished their time in assisted living and its accompanying nursing home. In 2015, 1.3 million people lived in nursing homes nation-wide.[1]  Some facilities are really swanky and some are pretty sketchy, but there were more than 15,000 nursing homes across the country in 2016[2] with new ones being built all the time.

This is probably a good thing, giving the aging population and the 70% chance that today’s 65-year-old will need some type of long-term care services in his or her life.[3] In Texas, roughly 12% (some 3.2 million people) are age 65 and older,[4] so chances are that if long-term care hasn’t touched you or your family, it has touched the life of someone you know. Women tend to need care longer than men, and 20% of all of today’s 65-year-olds will need care for more than 5 years.[5]

In Texas, a nursing home resident has “the right to a dignified existence, self-determination, and communications with and access to persons and services inside and outside the facility.”[6] Each facility is statutorily required to “protect and promote the rights of each resident.”[7] Each resident is supposed to receive a copy of the Statement of Resident Rights, which informs the resident that he or she has the right to “be free from abuse and exploitation.” The Texas Supreme Court has held that nursing homes have a duty to protect their residents and patients from harming themselves and each other.[8]

Despite this, Texas nursing-home residents face real risks for mistreatment. In addition to negligent-treatment cases,[9] some resulting in death, residents also face the possibility of physical, emotional, verbal, and even sexual abuse from nursing home staff and other residents. Consider the case of Silsbee Oaks Health Care, LLP v. Chumley, where a patient’s wife brought suit alleging that a nurse punched her husband in chest with the fist after finding her husband with a black eye and a diagnosis of two rib fractures.[10] Also consider the case of Gracy Woods I Nursing Home v. Mahan, in which a deceased patient’s daughter brought a claim against a nursing home for the sexual assault of her elderly mother by a fellow resident.[11] The risk is real, unfortunately.

In 2015, Texas nursing-home residents made 186 complaints of abuse, gross neglect, and exploitation, including 32 claims of physical abuse and 12 claims of sexual abuse.[12] As with any self-reported abuse statistic, these numbers most likely underrepresented.