“There Was a Spider” Distracted Driving

“There Was a Spider” 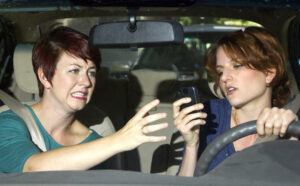 Many years ago, I was driving on a highway in Ohio, chatting with my mother who was in the passenger seat.  All of a sudden, I saw a good-sized spider crawling on the ceiling of my car, by the driver’s door.  I swatted at the spider and it fell from the ceiling *somewhere* to my left.  Was it dead?  Was it alive?  Was it poised to sink its venomous fangs into my tender flesh?!?

Luckily, I had the presence of mind to pull off the side of the road and look for it.  My sister-in-law would have likely driven the car off a cliff resulting in a spectacular fireball like you see in the action films.  She watched William Shatner in Kingdom of the Spiders as a child and has never been the same.

The next thing I know, an Ohio Highway Patrolman, coming from the opposite direction, flips on his lights and turns around to pull up behind me to see what was going on.  When he approached my window, my mother, laughing hysterically, says, “You have to tell him the truth!” which is not what a policeman probably wants to hear on a highway stop.  Blushing, I respond:

“There was a spider.”

Distracted driving takes many forms.  It’s a spider on your ceiling.  It’s applying mascara in the rearview mirror.  It’s the baby crying and the kids fighting in the backseat.  It’s fiddling with the radio and climate control buttons.  It’s taking a phone call or reading a text message.  It’s eating, drinking, smoking, and talking with your passengers.

By definition, distracted driving “occurs when drivers divert their attention from the driving task to focus on some other activity.”[1]  In 2016, distracted driving caused 3,157 fatal crashes resulting in 3,450 deaths.[2]  Cell phone use accounted for about 14%, or 444, of these deaths.[3]

Researchers have shown that the distracted brain processes information differently than its non-distracted counterpart.  One study placed test subjects inside a functional magnetic resonance imaging (fMRI) system while they used a driving simulator equipped with a fully functional steering wheel and pedals.[7]  Researchers monitored the subjects’ brain activity during standard driving conditions and under those same conditions while the subjects performed auditory tasks similar to having a hands-free cell-phone conversation.[8]

As a result, distracted drivers, including those using hands-free phones, tend to “look at” but not “see” objects around them.[11]  “Distracted drivers experience what researchers call inattention blindness, similar to that of tunnel vision.”[12]  Drivers using cell phones look at, but fail to see, up to 50% of the information in their environment.[13]

What’s more, the brain does not automatically shift back to “undistracted” mode.  The distracting effects can last up to 27 seconds after a conversation has ended.[14]  Driving at 25 mph, a vehicle can cover nearly 1,000 feet in this amount of time, or more than 65 car lengths.  At 55 mph, a driver would cover more than 2,000 feet, or 145 car lengths.

Texas drivers are not immune to distractions and may actually be more likely to be involved in a distracted-driving collision.  One study reports that Texas is the 16th most-distracted state, based on the percent of time drivers spend on their cell phones.[15]  Austin is the 2nd most-distracted city and Houston is the 6th most distracted.[16]

You may have been involved in a collision caused by a distracted driver without even knowing it.  The Texas Peace Officer’s Crash Report[17] does not contain a field indicating whether a driver was distracted.  The officer’s narrative often does not include this information either.  A deeper investigation may be necessary to prove fault and liability in an auto accident case.

[14] David L. Strayer, et al., Talking to Your Car Can Drive You to Distraction, Cognitive Research: Principles and Implications, 2016, https://appliedcognition.psych.utah.edu/publications/talk_car_drive_distraction_16.pdf (visited May 13, 2019).